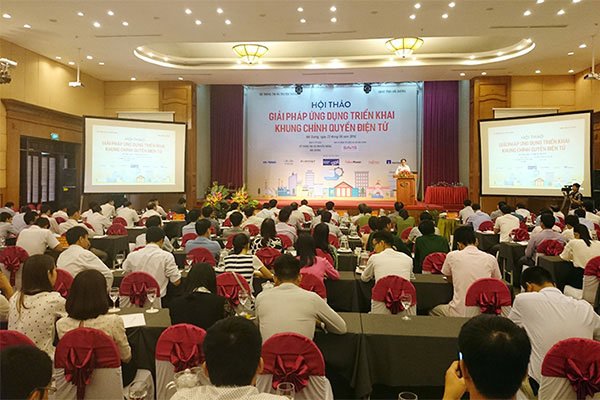 Participants of the conference comprised Mr. Le Manh Ha – Deputy Chairman of the Government Office, General Secretary of the National Committee on IT applications, Mr. Luong Van Cau, Vice Chairman of Hai Duong People’s Committee, along with numerous representatives of several Ministries, Departments of Information and Communications and top leading enterprises in Vietnam.

Mr. Le Manh Ha – Deputy Chairman of the Government Office, General Secretary of the National Committee on IT applications deliveried a speech at the conference

Recently, e-government becomed an inevitable trend which being deployed intensively in many countries. The Ministry of Information and Communications promulgated a Vietnam e-government framework version 1.0 which is applied for Ministries/Departments, provinces and cities across the country. However, the practical implementation has been facing a great deal of challenges, especially in local because the current Framework was just the general pattern, some of technical criteria for connection and sharing service remain unclear.

At the conference, Mr Le Manh Ha – Deputy Chairman of the Government Office, General Secretary of National Committee on IT application, praised Hai Duong Department of Information and Communications as the organizing committee. The conference has shown practical and essential issues of deploying e-government framework.

Mr. Le Manh Ha also suggested that promoting the settlement of online registration would help improve the transparency in state agencies. “Besides, Hai Duong e-Portal should open the business supporting module on the portal; reinforce the online queries via e- Portal to serve residents bette”, Mr. Le Manh Ha also explained some contents of the Resolution 36A for the participants at the conference.